A jerky gun that is..

Getting ready for meat season, I diligently organized my freezers the other day. Multiple bags of fish carcasses for bait, some other organ meat for catfishing, some coyote quarters to test my friend’s palates, a couple bags of mystery meat, and then I spied it.

A six pound bag of ground deer meat, that had been patiently waiting for me to turn it into jerky all year. An equal opportunity omnivore, I decided to remedy my neglect at once.

Only one problem, I can’t find my jerky gun. I found the nozzles in the draw, but no gun. My usual go-to technique of asking my wife is thwarted by her trip to Florida. While she playfully describes my dependence on her uncanny ability to find stuff as “helplessness”, I refer to it as an “efficiency”. If you need to find something in the store, don’t you ask someone?

So I did what any good neanderthal would do and abandoned the search in favor of my new “Jerky Hand” technique. The de-evolution process took a few steps though. First I tried her rolling pin, but the meat stuck to it. Then I tried using the meat mallet, but that was too small. Frustrated, I struck on just smashing it flat with my hand and cutting it in strips. No more Jerky gun for me!! The strips are thicker and turned out great. No more stupid tube to stuff either. 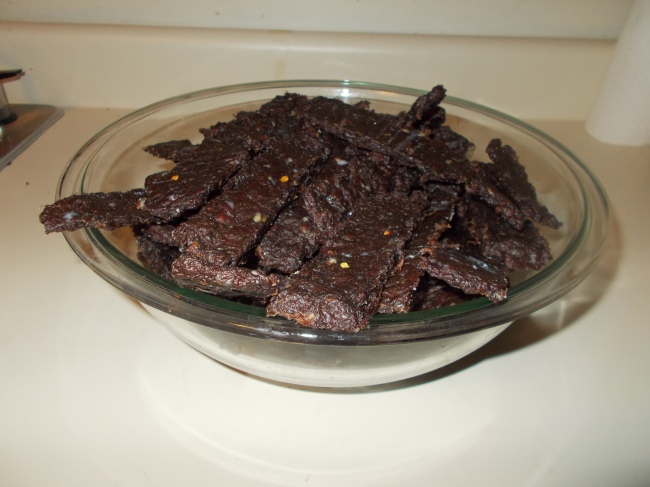