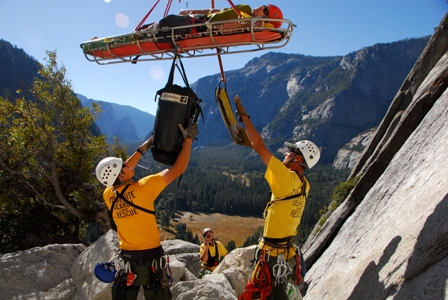 The combined efforts of search and rescue teams from Black Canyon of the Gunnison National Park, Ouray Mountain Rescue, West Elk Mountain Rescue and Western State Mountain Rescue resulted in the successful evacuation of an injured climber from the Atlantis buttress during a spring storm on Sunday, April 13th.

The park received a report of an injured climber on Saturday evening.  Climbing rangers, including a park paramedic, located the climber late that evening and bivouacked overnight with him, treating his several injuries.  He was injured when he pulled a large boulder off the wall while leading a pitch on a route called “Hotlanta” on the Atlantis buttress.

The climber, who is from Durango, Colorado, was taken to a medical facility with ankle, chest, and facial injuries. He is in stable condition.

Lost in the desert and forced to spend the night out – http://www.scsun-news.com/silver_city-news/ci_25565756

Stuck on a ledge after taking a short cut – http://www.standard.net.au/story/2229934/grampians-rescue-after-hikers-short-cut-leads-to-a-long-wait-for-help/?cs=72

Injured in a canyon – http://azdailysun.com/news/local/coconino-county-search-and-rescue-extracts-canyoneer-near-west-clear/article_ab5358b0-c45d-11e3-a493-0019bb2963f4.html

Father and son go hunting, end up with broken leg and hypothermia – http://www.stuff.co.nz/manawatu-standard/news/9938734/Father-and-son-hunters-rescued

SAR for missing hiker continues, but volunteer efforts scaled back due to subject drug abuse and violent behavior history – http://www.osidenews.com/2014/04/12/missing-person/

2 thoughts on “Search and Rescue Weekly..”