After almost 3 weeks in sunny 70 degree Florida, we rolled back just in time for the arctic blast that is gripping the country with forecasts of single digits in our area. I figured it would be a great time for me to hit the woods with an ultralight shelter version and run the Survival 101 drills.

Last night I headed out with my hunting pack to simulate the overnight bivouac without a sleeping bag and jump in the creek in the morning. While I sleep out with every class, I don’t wallow in the creek with them as one of our safety protocols.

On the way  to the camp when I got a call from a buddy asking if I wanted a hog he just shot. Fate would have it, that I was visiting with a friend that was down from New York and wanted to bag a hog. So my buddy dropped this beauty off, and 6 1/2 minutes later it was poacher cut up and I was back on my way. Click here to see that technique. I have since modified it to start with one side’s legs first then the backstrap, flip over and repeat. https://bigpigblog.com/2013/12/23/poachers-cut-1-0/

Back on my way, I set up a “String only” super shelter with a 1 mil 9 x 12 drop cloth. At some point, I plan on doing a blog series about what I have learned since Mors first taught me that technique 15 years ago, but for now, the 1 mil version only weighs 9 ounces compared to 18 ounces for the 2 mil. Durability is the big question as 1 mil is pretty thin. 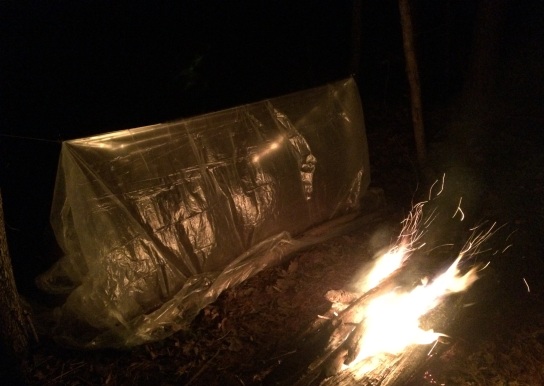 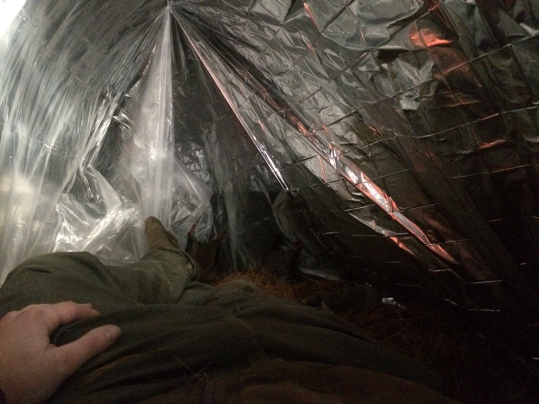 I bedded down around 11pm after building up my fire, brewing some pine needle tea, and making a hot water bottle.

I woke up at 1:30 am when the fire died down and loaded it a little too hot on next run.

So instead of shuffling layers, I opened the front to vent. Lulled by the primitive television, I drifted off to sleep again.

I woke at 3 am this time, loaded it up, closed the front up and bedded down. I couldn’t sleep until somewhere around 5 am, not because I was cold, but because my brain booted up and I started my usual lay in bed and think about all types of things, some practical and some nonsensical.

I woke up for the last time at 7:30 am and checked the low on the thermometer. It read 5 degrees. The indoor low actually occurred during the the open front stage.

Even though I had 1000+ calories in my pack in the form of almond butter packs and coconut oil, I wanted to simulate a hiker whose last meal was lunch. I did a 24 hour fast, drinking pine needle tea that night, and thawing out the leftovers for a morning brew. Staying hydrated during any fast is top priority and the tea gives you some vitamins. 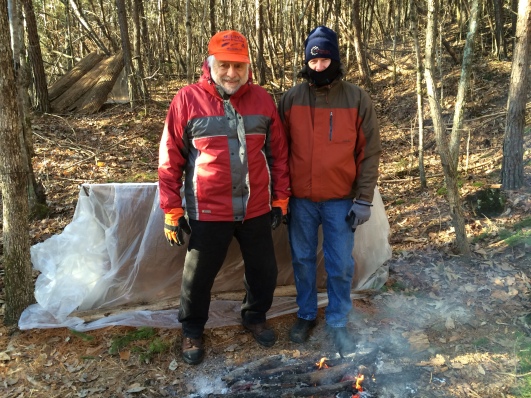 My “rescuers” showed up at 9 am to be my safety team for the “Man in the Creek” drill.  Anytime you are survival training, always have a safety net and plan in place if things take a turn. Rick and Mike were there to monitor for hypothermia and I had a sleeping bag a short hike from my camp for my solo overnight. I had multiple contacts that were aware of my plans and a charged cellphone. Redundant, multiple safety nets mean you can push hard and train safe.

It was 15 degrees and time to take a morning dip in the 34 degree water. 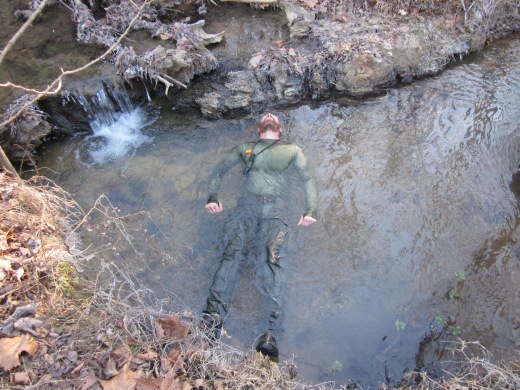 I ran through the same mental exercises as my students while I waited for the shivering to set in and then got to work. 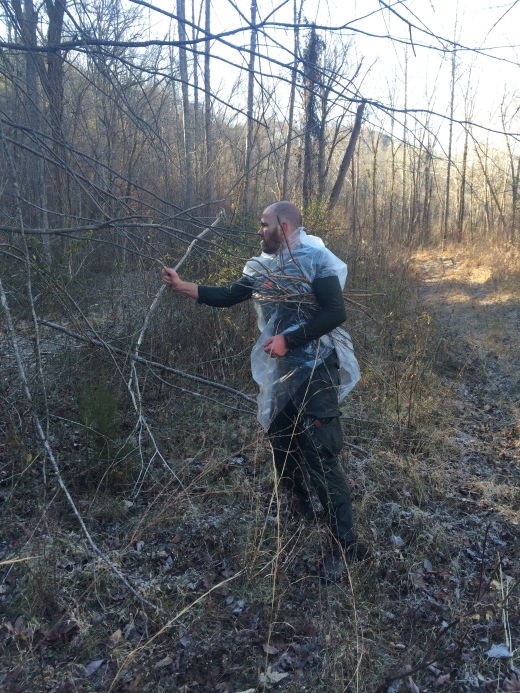 Usually we do this drill with natural tinders, so everyone always packs man made after that point, but having done that multiple times, I wanted to time the drill with my personal survival kit (PSK) contents.

My safety crew forgot to start the timer, but using PJ balls and fatwood made lighting the fire a breeze and took only a couple minutes.

Numb hands made the Strikeforce my choice of ignition as it fills the hands better when your dexterity sucks.

As my buddy Roberto likes to say.. “Fatwood. Don’t leave home without it!!” 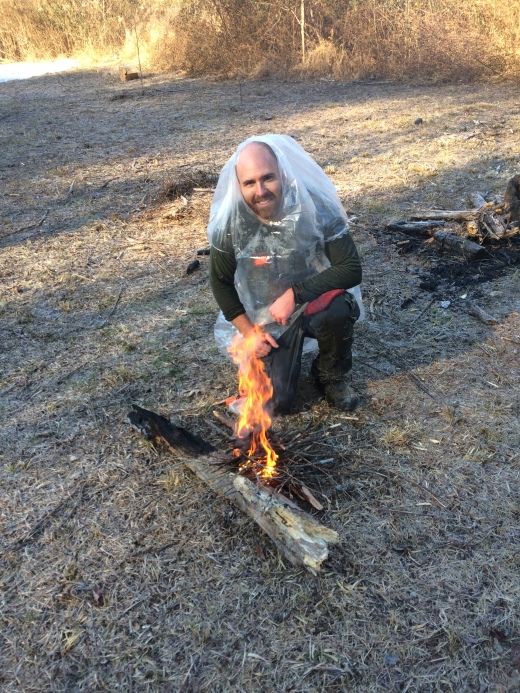 This post isn’t about bragging. Hell, 5 degrees is shorts weather in Alaska…

It is about “walking the walk”, something I value and appreciate in instructors. When I was LE, I took my job seriously. Bad guys were my main threat, so I trained, worked out, shot 3gun matches, and joined a MMA team. I chose those endeavors because they were realistic training modules for serious threats. Serious threats require serious training, and wilderness survival is no different.

Jobs change and new threats rise to the top. Getting caught out in crap weather overnight or falling in the lake are possible scenarios in my winter time work. While the threats may change, the reason to make yourself uncomfortable, experience numbing pain, and train hard don’t.

If your work or play takes place in the wils or you are looking for a challenge, there a two more spots open in this weekend’s class – http://www.bigpigoutdoors.net/survival-101-1.html