Search and rescue volunteers faced a life-threatening situation when two avalanches fell in the slopes of mountain Esja outside Reykjavík during a rescue operation on Sunday evening. Two of the volunteers were tossed 80 meters (262 feet) with the second avalanche, one of them injuring his leg.

They had been called out because of a hiker, a Norwegian, who had contacted the 112 emergency hotline between 5 and 6 pm on Sunday, requesting help, as he couldn’t find his way down from Esja in the deteriorating weather conditions,visir.is reports.

Over 100 search and rescue volunteers from ICE-SAR were called out to search for the man. It soon turned out that he was located in the innermost part of Blikadalur valley and the volunteers drove there on ski-doos.

Among them were Guðmundur Óli Gunnarsson and Gísli Símonarson. They had driven their ski-doos up a steep slope but had to leave them approximately 500 meters from where the man was located. They continued on foot. Shortly afterwards an avalanche fell, throwing them ten to 15 meters but leaving them unharmed.

“We had to ask ourselves whether we should carry on or back out of the situation. There were only 200 meters left to the location where we thought the man was,” said Guðmundur. They therefore decided to continue. “He had turned cold and said he had never been as happy in his life as when he saw us there.”

Guðmundur and Gísli brought the man to their companions and then returned to pick up their ski-doos. Then a second, and much larger, avalanche fell. “Suddenly everything started moving, the snow just set off all around us and we rolled down some 50 or 80 meters,” Guðmundur recounted.

Guðmundur said they were lucky to have escaped relatively unharmed, although he injured his foot. He described it as a terrible experience to have been caught up in the avalanche and admitted that he had feared for his life at one point.

“Naturally we seriously considered withdrawing our team but we knew that we were very close to the man who was lost and that his condition was unstable. So we jointly decided to carry on and save the man,” Jónas Guðmundsson of ICE-SAR, who directed the rescue operation on Esja on Sunday, told visir.is. He added that if it had taken them a few more hours to get to the man it would have been too late.

“We who live nearby tend to underestimate Esja. It’s a real mountain. [When climbing] we achieve an elevation from zero to almost 1,000 meters [3,280 feet],” Jónas stated.

Gísli pointed out that it’s important that people look at the weather forecast before setting off and make sure that they have the right equipment. “The sun might be shining and the weather be good but during a two to three hour hike the weather can change very quickly.”

ICE-SAR search and rescue teams were called out ten times last year to save hikers from Esja, often under difficult conditions.

Interested in learning skills to handle emergencies like the ones you read in Survival Weekly?   Check out BigPig Outdoors Survival 101 class  – http://www.bigpigoutdoors.net/survival-101-1.htm 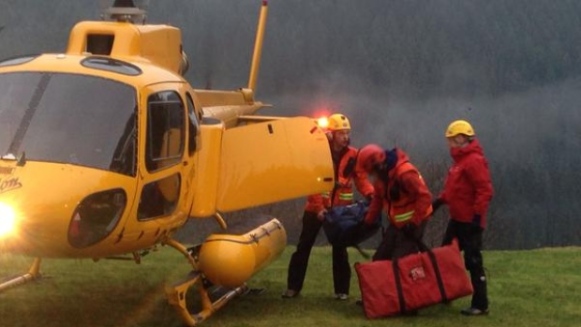