The cost of doing business – http://www.skyhidailynews.com/news/16514082-113/search-and-rescue-card-is-a-good-investment

Rangers saved a man from New York after he fell approximately 25 feet into the Grand Canyon of the Yellowstone on Sunday, May 10th.

Shortly before 5:30 p.m., a 71-year-old man was attempting to take a picture of a sign at Grand View at the Grand Canyon of the Yellowstone when he stumbled backwards over a stone barrier and into the canyon.  After falling approximately 25 feet, he was able to stop himself at the top of a precipice by bracing his body and feet on opposing sides of a small crevice.  A visitor who witnessed the man’s fall ran to a nearby parking lot to call 911.

The first two rangers on scene threw a looped rope down to the man and secured him to a sign and tree at the top of the canyon. Park employees and members of the park’s technical rescue team responded to the scene and set up a system of ropes and pulleys to carry out the rescue.  One harnessed member of the technical rescue team descended to the man’s location and secured him to the pulley system.  The man was then able to walk to safety with assistance from the ropes, pulleys, and ranger.

According to staff on scene, the man was extremely lucky.  The crevice and the angle of his body during the fall helped the man stop at the top of a 200 foot drop.  A fall just inches to the left might have resulted in a fatality, as the canyon wall is mostly steep loose rock.

The man was transported by ground ambulance to a helicopter ambulance for a possible hip injury.  Seventeen Park Service staff assisted with this rescue.

On the morning of Thursday, May 7th, park dispatch received a report from several fisherman of a man yelling for help on an overturned kayak across from Eshback.

Rangers patrolling the New Jersey section of the park were on scene within minutes of the initial report. They found that a 78-year-old New Jersey man had overturned his anchored kayak while fishing, that he’d been in the water for approximately 30 minutes prior to the initial report, and that he was wearing a lifejacket that was not properly fitted. The water temperature at the time was 59 degrees.

Within five to ten minutes of locating the man, he began to complain of shaking uncontrollably, had difficulty answering basic questions, and said that he couldn’t hold on much longer.  Due his distance from shore, the rangers could not reach him with a throw bag. With the rescue vessel still 15 to 20 minutes out, it was decided that the rangers would enter the water to attempt a rescue.

Two rangers wearing properly fitting PFDs entered the river and were secured by several throw bags. They swam half way across the river, reached the man, and cut the anchor line to his kayak. Two rangers on the shoreline then pulled all three to safety.

A waiting ambulance took the man to a local hospital, where he was treated for hypothermia. He was released from the hospital later that day.

Members of a private boating trip reported the wreckage of an airplane to park rangers at Diamond Creek on May 20th. The boaters informed the rangers that they found the plane with human remains inside during a hike near Emerald Canyon.

Inclement weather prevented rangers from responding to the scene via helicopter until this past Sunday. They first recovered the remains, which await identification from the Coconino County medical examiner, then packaged the plane in a sling load and recovered it using a long line.

The wreckage matches the description of an airplane that disappeared in 2011. That plane, a red RV6 homebuilt experimental aircraft, was last seen at Grand Canyon Airport around 8:30 a.m. on Friday, March 11, 2011. The NPS used both an airplane and a helicopter in search efforts at that time, covering 2,000 air miles over a 600-square-mile search area.  Civil Air Patrol’s Nevada Wing, Coconino County Sheriff’s Office and the Air Force Rescue Coordination Center assisted in that search. Search activities continued on a limited basis after April 1, 2011.

The National Transportation Safety Board is investigating the accident. 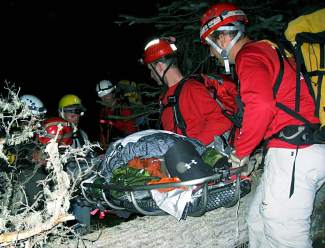