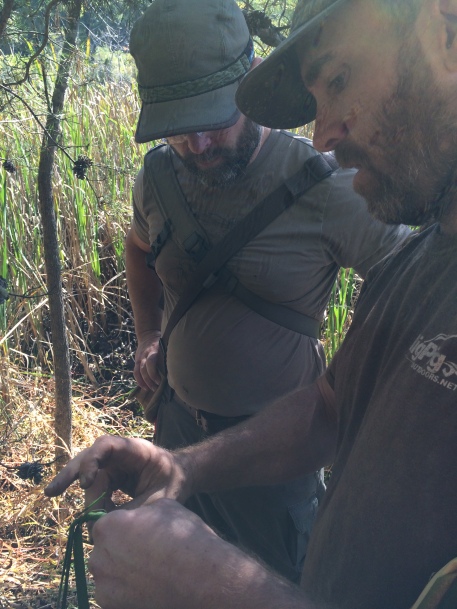 We had great weather for a great class this past Saturday. Some people are interested in foraging for survival purposes, some for medicinal, and some for culinary. At BigPig Outdoors we try to cater to all the crowds, so we forage and cook over the fire and also dine on stuff I bring from the house.

Among the many plants from the field, we harvested hackberries, groundnut beans and tubers, jerusalem artichokes, hog peanuts, muscadines, wild grapes, black walnuts, cattail, watercress, and hickory nuts. We soothed fire ant bites with plant medicine, made cordage in the cattail swamp, tasted ground cherries, played with pitch glue, and crushed an iPhone. 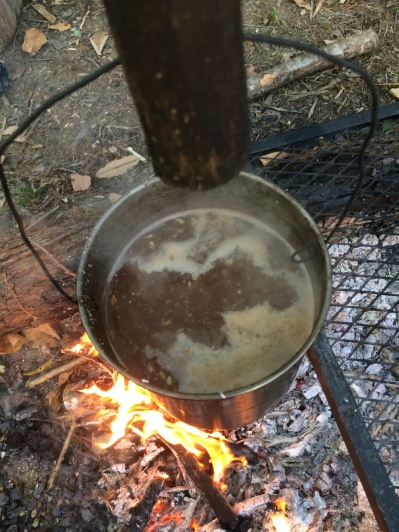 From the kitchen we ate autumn olive fruit leather, papaw bread, persimmon bread, autumn olive juice, and beautyberry jelly. You may have missed the class, but you don’t have to miss the recipes.. 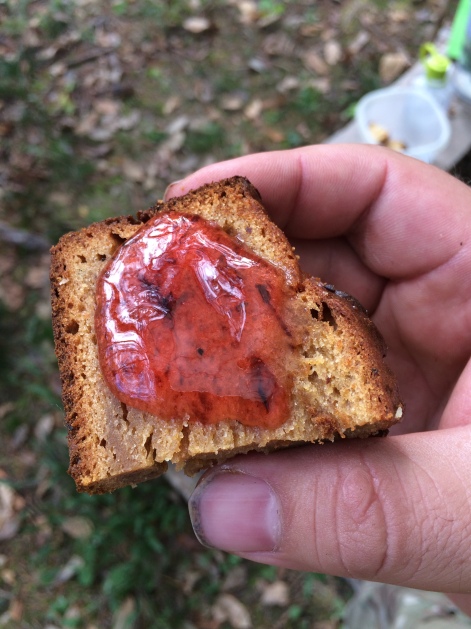 1 ½ qts. of Beautyberries, washed and clean of green stems and leaves. Cover with 2 qts. water.Boil 20 minutes and strain to make infusion. Use 3 cups of the infusion, bring to boil, add 1 envelope Sure-Jell and 4 ½ cups sugar. Bring to second boil and boil 2 minutes. Remove from heat and let stand until foam forms. Skim off foam, pour into sterilized jars, cap.

Interested in learning more about the plants around us? Check here for upcoming class dates: http://www.bigpigoutdoors.net/poisonous–edible–medicinal—-useful-plants.html 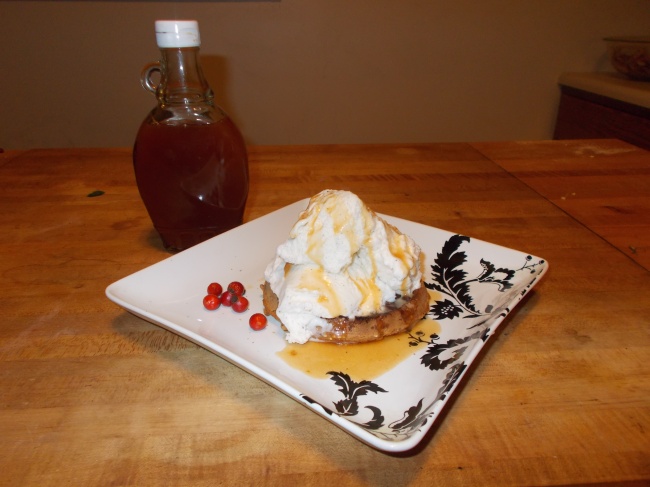 We had planned a “Goonies” trip, with the intention of finding an old cave that according to redneck lore had Civil War crates in it. So we set out with the canoe on a beautiful fall day. My wife asked that I didn’t shoot any squirrels on the trip, but I justified taking my new .22 pistol just in case we ran into the Fratellis. The cave was silted in, so we turned our attention to scouting for campsites and foraging, all the while being taunted by the barking squirrels.

Nevertheless, we did find a new pawpaw grove, some large cattail beds, more beautyberry, a loaded persimmon tree, and a couple quarts of rose hips. We have been drinking rose hip tea, known for it’s high Vitamin C content, but wanted to branch out tonight and try something new.

Rose Hip Syrup – I had read about it on the internet being heavily promoted by the British during World War II, due to diffulculties of importing citrus fruits. One of my mother’s British friends survived those times and the Blitz, so I called her up today and she confirmed Wikipedia’s tales. How about that?

To one cup of boiling water, we added 2 cups of chopped up Rose Hips and let is simmer for 20 minutes. We then strained it through a jelly bag, put it back on the stove to simmer, and added 1/2 cup of sugar until it dissolved. That recipe made 8 fluid ounces.

The taste is unique and hard to describe, but on top of waffles and ice cream my wife described it as “quite decadent”. That word is pretty fancy for me, but my hillbilly buddy that stopped in said “Damn, that’s good”.

Supposedly, Rose Hips contain 20 times the Vitamin C of oranges, so it is a perfect time to make some up as the weather turns cool. 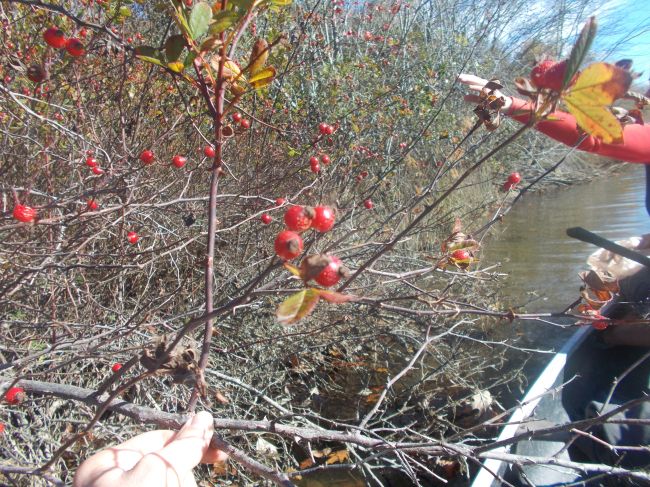 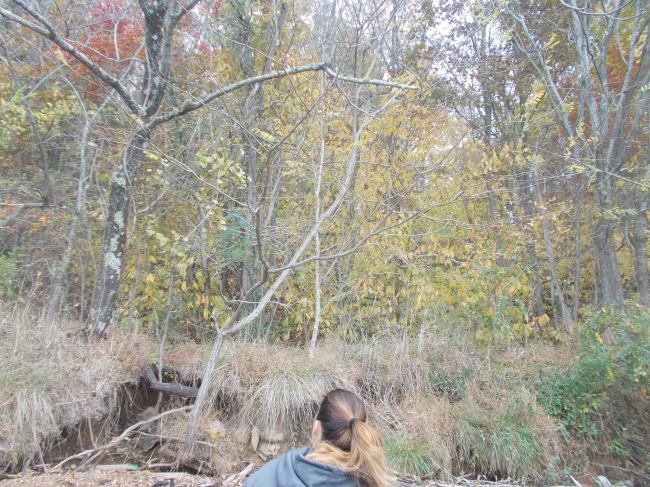 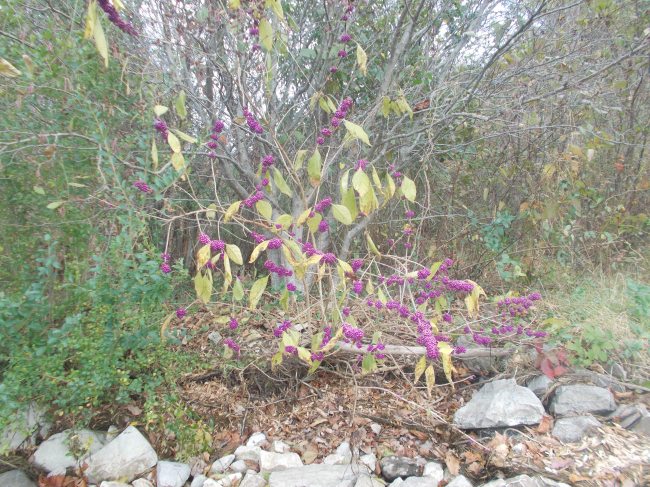 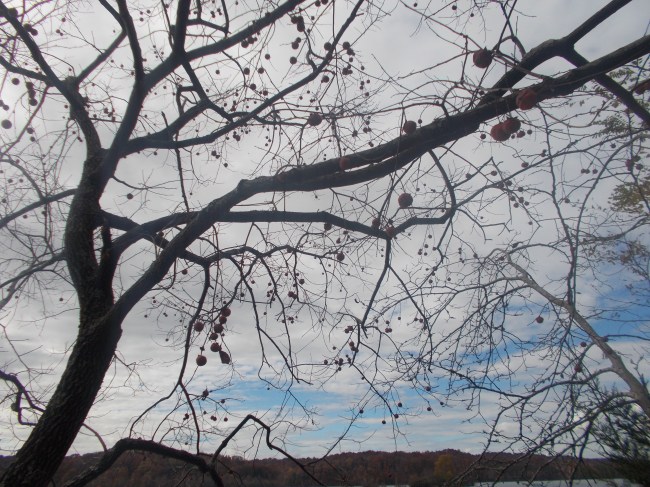 A beautiful fall day looking across the lake to the school location. 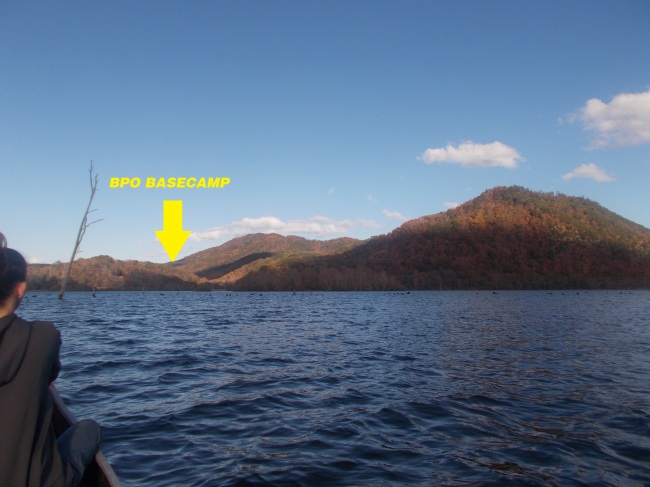 And my favorite part of the day. A nap in the fall leaves… 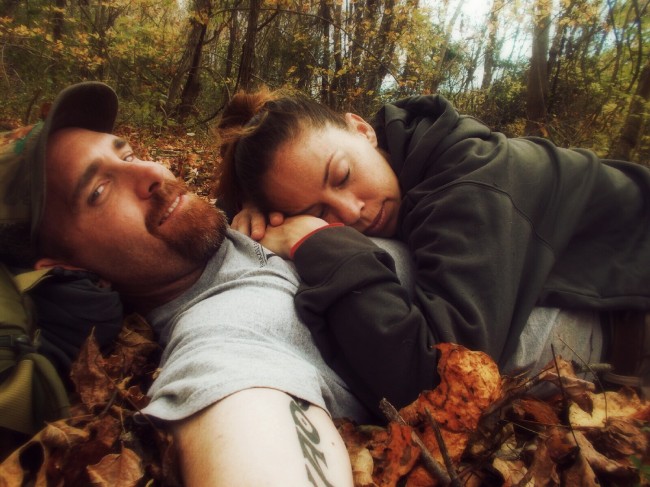 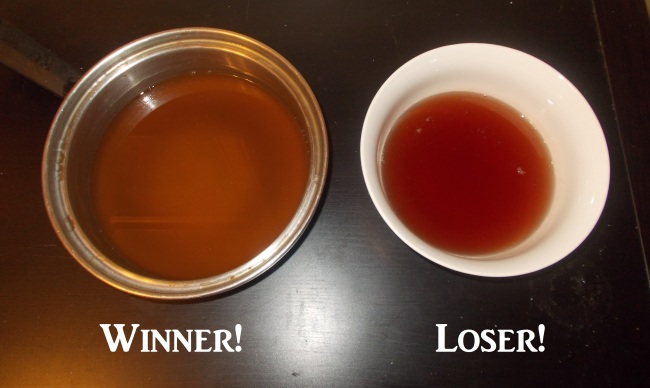 I decided to try two other possible uses for Beautyberry (Callicarpa americana) before I finished up house sitting for my in-laws in sunny Florida.

Bug repellent:  An old folk remedy, USDA has had positive results in their research of beautyberry as an insect repellent (I will post the link once the government shutdown has run it’s course and the website is back up).

I wanted to poach some of my mother-in-law’s bamboo for some camp kitchen projects before I left, so I thought there would be no better time to test out Beautyberry Bug Juice on the rabid Florida mosquitos. I raided her liquor cabinet, liberated a bottle of vodka, and boiled up some leaves.

Before heading out to the bamboo grove, I slathered up the left side of my body with the juice (t-shirt & shorts) and I am very happy with the results.

That is good enough to warrant further trials in my book!

Syrup: Don’t waste your time. We wanted to try some syrup out on our ice cream and used the standard 2:1 ratio of sugar to juice. In the words of my step-daughter “it tastes like bad sugar”. I guess the pectin really adds to the jelly. Not to worry, we salvaged dessert with some jelly on the ice cream. 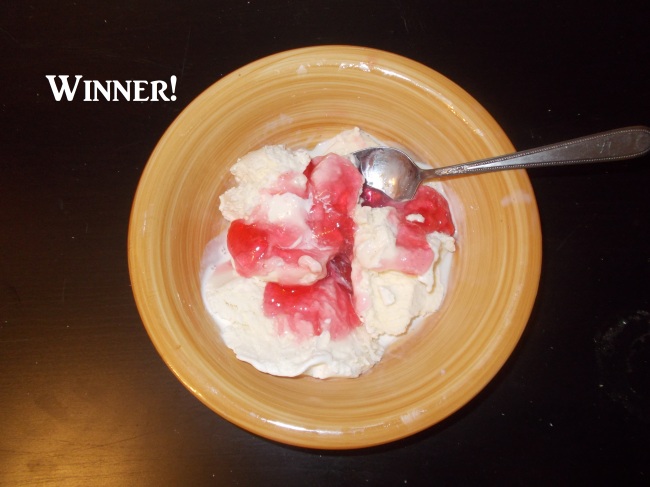 Five days in Florida is over. We got to forage and sample some sea grapes and a couple palm species. As I was hauling a backpack with 30 jars of beautyberry jelly, some bamboo bowls, and a 24″ section of bamboo back to the mountains, I chuckled to myself thinking about my mother-in-law, who I affectionately call Granny, returning home. 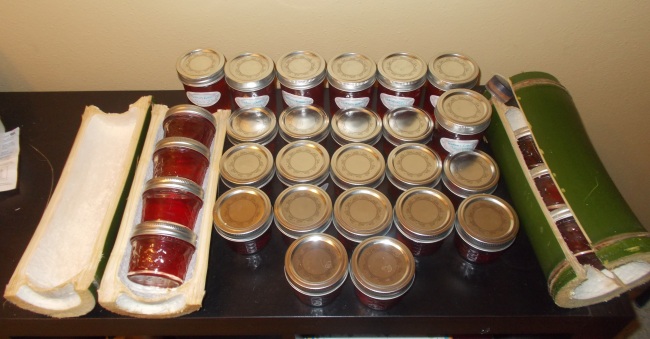 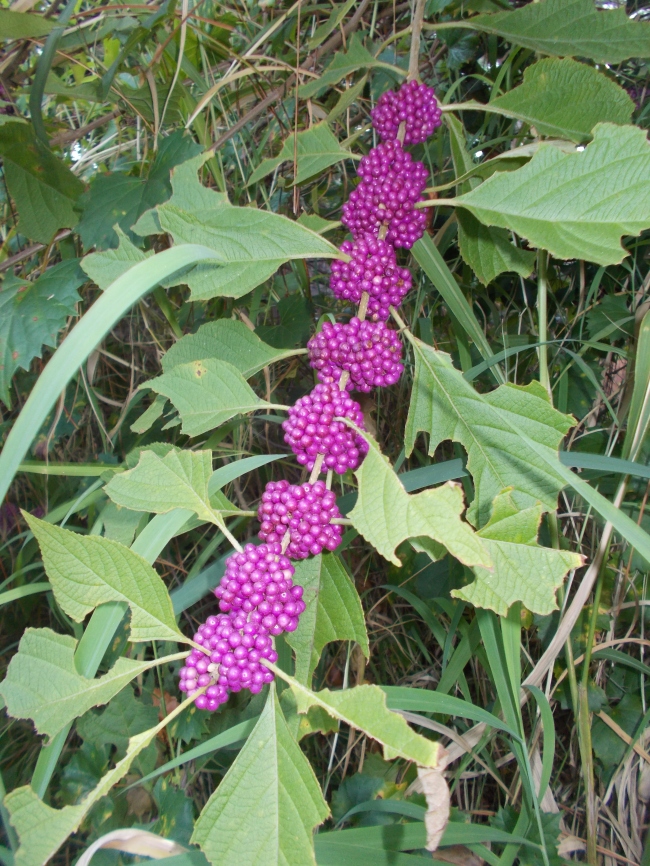 When I visit  the in-laws, I can hang out inside the indoor flea market called their house or get outside and explore. I chose the latter and found they had a nice crop of beautyberry (Callicarpa americana) in the woodline behind their house. So I convinced my step-daughter that making jelly is much cooler than homework, not a hard sell. Unfortunately, I couldn’t convince her to let me eat the armadillo that is burrowing under her pool.

We followed the recipe from “Florida’s Incredible Wild Edibles” by Richard Deuerling and Peggy Lantz.

1 ½ qts. of Beautyberries, washed and clean of green stems and leaves. Cover with 2 qts. water.Boil 20 minutes and strain to make infusion. Use 3 cups of the infusion, bring to boil, add 1 envelope Sure-Jell and 4 ½ cups sugar. Bring to second boil and boil 2 minutes. Remove from heat and let stand until foam forms. Skim off foam, pour into sterilized jars, cap.

We followed the instructions and made five 8 ounce jars and had enough infusion to make another batch today. 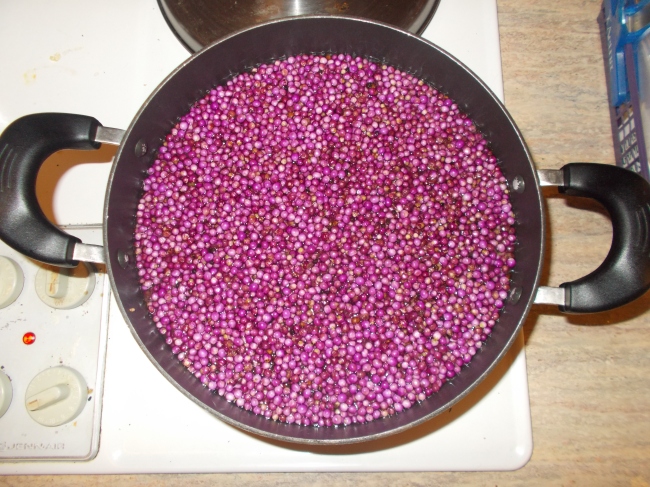 We were all surprised at the results, as the raw berries are not anything to write home about and they didn’t smell that great while cooking. However, as advertised, the jelly is “exceptional” and I found myself staking out the neighborhood bushes on my run this afternoon. Over the next couple days, I am going to commandeer the kitchen for my makeshift jelly factory and test out the bug dope recipe as well. 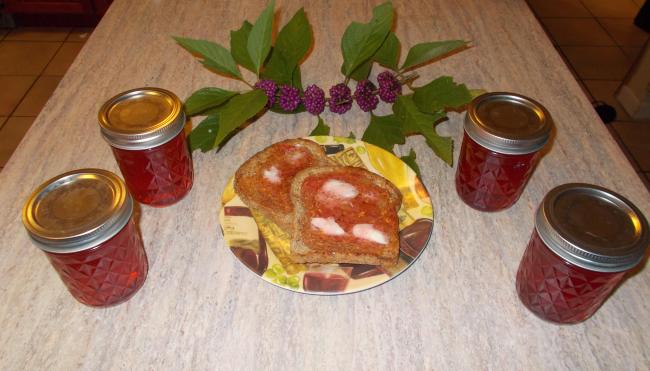